The September Accountability Society: Week 1 - "Then it's no failure".

A sticky note on the wall of my study bears the message "Anything can be fixed, but if you do nothing then nothing will be fixed." This used to be stuck to my monitor at a former workplace; a reminder that the task I am avoiding will only continue to be difficult to finish the longer I put it off. 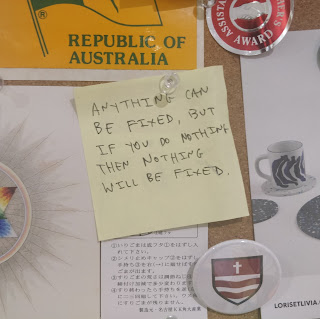 In this moment, I want to be able to direct you to the completed project from last week, but despite eating into two days of this week's work, it still hasn't quite come together. I have decided to post it online nonetheless, and leave it as a work-in-progress. It is called Pause, and you can view it here.

Despite feeling a certain sense of disappointment about not finishing this work on time, I need to remind myself that 1) the only person worrying about this deadline is me and 2) pushing myself into this month-long initiative has actually paid off in other ways. After seeing last week that an art prize back in Australia had a deadline approaching, I dusted off an unfinished video project in order to make the due date. It's the first video work I've made in three years, and it felt good to be back in that mode of thinking. I have not yet posted the final work publicly, but will do so once I'm sure it's OK to do so (some prizes have rules about works not being able to be previously exhibited, and the language in the terms and conditions for this one is somewhat vague).

Secondly, after telling myself for the last two years that I would do so, I have uploaded two recent works, Artworld Gaiden I: Progression/Digression (2017) and Write What You Know (2016) to Itch.io - an online platform for hosting independent games and other interactive works. These works were originally commissioned and published within the online journal Runway, but for various reasons I have continued to tweak both projects in the intervening years (mostly to fix typos, and the occasional dead link).

With both projects, I never quite felt they were finished when they were handed in, to the point of saying they were both "pre-Version 1.0" - but the target for what would constitute both of these works being 'finished' kept seeming to drift. Talking with a friend recently about these works, and their beta-like state, provided me with a push to finally publish these in their final form, save one more check for typos.

Another friend shared with me some pictures they had been working on as part of their own September-long project, and apologised for not quite making the deadline. I explained that I too had somewhat failed, but that the week had yielded other results. "Then it's no failure," he replied, matter-of-factly. After spending such a long period of time with latent creative energy, it becomes easy to berate oneself for not hitting milestones, even when any action is a vast improvement on the previous status quo. So it feels true to the process to at least be public about this, and simply move on to the second week, instead falling into an easy pattern of chipping away on something and letting the great prize slip.

For Week Two, I'll be working on a continuation of Artworld Gaiden - itself a spin-off of another idea that never quite got off the ground. This project is more an attempt to test out some mechanics I've been kicking around across many other sticky notes, so while it might not look like much, it will hopefully be something of a palette cleanser. 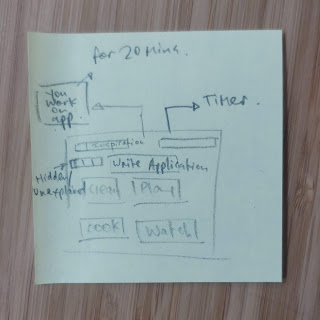 Good luck with your projects. See you soon.
Posted by Daniel Green at 11:10 pm