Daniel used to live in Sydney but now he lives in London: 28th September 2016 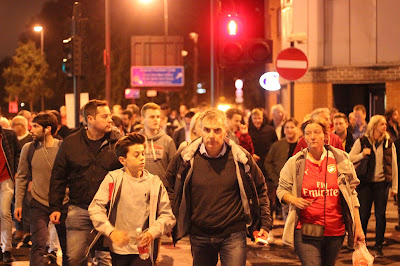 As you leave Finsbury Park station to head to our apartment, you pass a store dedicated to selling merchandise for Arsenal Football Club. I found this novel when I first saw it, joking that this resolves the eternal expat dilemma of working out which club I'm supposed to support. The penny didn't quite drop though that this would also mean that I would be living at Arsenal Ground Zero, and that I can hear the reactions to bad umpire calls from our living room.

Returning home on Wednesday evening, we walked headlong into the match's aftermath as fans marched towards the Tube from Arsenal Stadium. Not everyone had the laser-focus of the chap above, in fact the mood overall was quite jovial (this is probably due to the fact that Arsenal beat FC Basel 2-0), but I enjoyed the overall scene of fans trying to get home; the business of the match done, everyone wanted to get out of FInsbury Park as quickly as possible. 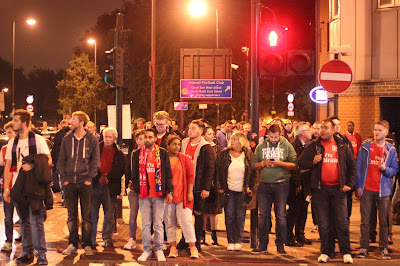 For our part, we'd spent the evening in the city wandering around working what things we need for our new apartment; the kinds of things you completely take for granted once you've spent the good part of decade living somewhere before you decide to move across the planet.


Our last stop was at the Science Museum's Lates program, which in feel reminded me a lot of the MAASive Lates nights I've worked on back in Sydney. Of course, the Science Museum is very different venue, with a great deal more space available to it. It also has a prototype of an atomic clock, just lying around, because why not? 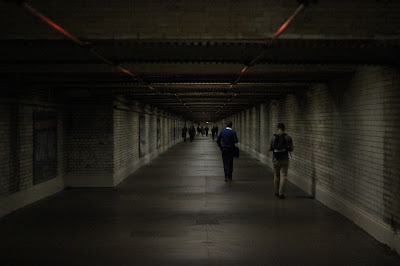 Walking from the museum to South Kensington station, I snapped the above image in all it's moody glory. The lighting is actually much better than this photo would suggest, but considering the last time I was in this place was in 2009 at the peak of the day's foot traffic, I quite enjoyed the contrast this offered.

Enjoying the musings and pics v much SHx